I really don't care much about lj anymore, if they refuse to fix my problem than they can get stuffed!! I haven't been able to update my journal there for more than a week and quite frankly im getting tired of that crap. Thank god for diaryland, the only thing is that i will no longer be able to upload pics but oh well..

Saturday, we went to That's Entertainment and i bought a whole bunch of films,including "Saved!" (McCauley Culkin film i've been after for a while now).

Sunday, me and Stew went to the largest indoor flea market (we usually go to a much smaller one but this time we decided to check this one out) and it was huuuuuge!!!! We spent 2 hours walking around, there was soo much to see! There were several new shops there too, there was one that had so much Hello Kitty stuff etc..
Stuff i got: vintage pearl clip-on earrings, a small black rose hairclip, 2 small collectible dolls (they are replicas of the dolls that came out of the 30s and theirs eyes close)i forgot the name?? i think Kelly dolls?, and 3 vintage film posters. Afterwards, we discovered a big Starbucks out of nowhere..yummy passion fruit ice-tea and whoopie pies. Luckily we got in before the storm hit real hard! We were in their for an hour until we could make a run for it for the bus until it stormed again..yeeeesh! Also rented out "Camp Hell" coz of Jesse Eisenberg who i have a crush on lately!! But he only had a bit part in it..the film is weird coz its a true story about this religious camp for teens and it focuses on a boy who is possessed by a demon and things happen in the camp coz of him, its a good film but it was just plain weird and hard to believe that this really happened!

Been reading this book..sooo good!! Its a follow-up to Go Ask Alice. 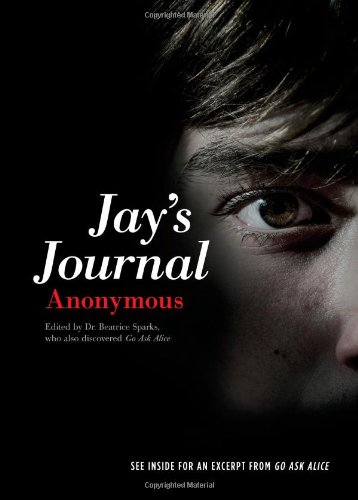 At least i can still put images on using html :)