Its sooo bloody cold..had to walk home from work in -11 degrees frigid toes frozen off weather!!!! luckily i had my black & white striped fingerless gloves on and my teddybear hat, my extra puffy jacket, except converse sneakers was totally a bad choice of footwear! On MTV Live, they spoke of a religious egg with sign of the cross that a chicken laid and the guy said "Jesus loves omelettes!" which cracked me up! Well, maybe he could love them scrambled too..i dunno?? but it was weird seeing that cross on the chicken egg! Did my nails this pretty shade.. 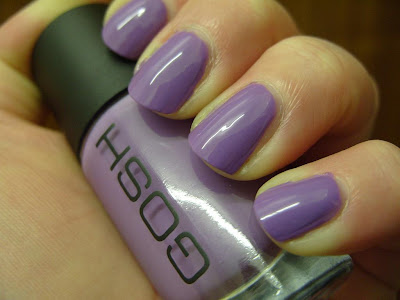 Maria wants to borrow it, but i don't know, i really hate lending out make-up coz of what happened last time, i ended up with a cist on my eye-lid from lending my jade eye-liner to a friend years ago and i had to have the cist surgically removed and it was a fuckin' painfull precedure, something i never ever want to go through again! I made this yummy oven-baked sweet potato with oats casserole yesterday,it was sooo good! i love eating wintery type foods in cold weather although i seem to be craving ice-cream right now. Vic phoned me at work..yippeeeee!! and we have decided to go see Michael Jackson's "This Is It" film on Friday night. I'm getting a big nervy coz i don't know what to wear, what to talk about, what to do..LOL..im a bloody nervous wreck already!! i know..i know..just be myself and take it slow..corrrrr..i hope he doesn't think im a tart and want to do it on the first date..i have never ever done that and i don't ever plan to! I'm kind of old-fashioned when it comes to dating..ewwww..i know it sounds boring, but thats just the way i am. Oh this new girl at work, we had lunch together in the small kitchen in back, well, its really more like having lunch inside a sardine can, but still, its cozy with one microwave, sink, tons of coffee supplies, 2 square Ikea tables with folding chairs..anyways, we talked about guys while i read her tarot cards, i've been getting back to fortune-telling lately..i really miss it, so then she goes that she's done it with more than 25 guys, she's always got a new boyfriend practically every week and she has to have a load of condoms on hand all the time and she says that doing the dirty with guys helps her when it comes to her period coz she's not that sore anymore. I dunno if that would help me?? when i have my period it hurts like hell and i have to always take midol! But i wouldn't have sex just for that reason, i told her that i like to wait to make sure before i consider having sex with a guy and then she was all like "ohmigod..are you still a virgin?" and im thinking, its none of your business!! Obviously i was blushing like crazy for her to have asked in the first place..so what if i am..gawd!! Anyways, then she talked about classic actors and that she loves strong women roles and her fav. actress is Katherine Hepburn and she can't stand Marilyn Monroe coz she's so dumb even though she knows Marilyn is one of my favs. and i told her that Marilyn was quite smart and a great artist. Then we talked about guys again and she warned me that Vic might try something while we are watching the film and she made me feel very uncomfortable coz thats not what i wanted to hear, now im even more nervous than ever but then its not like i haven't been out with guys before to the movies and they never tried anything..oh i don't know..! She made me sort of mad so i was hoping that she'd get something nasty during the tarot reading but she actually got a card that said that she'd get some money soon and she got excited about this and sure enough, she a raise on her paycheque and im thinking that i've been working all this time and i never got a raise and here comes this new girl and already she gets one?? erm..is she fucking the boss?? Grrrrrrr..people like that make my stomach go into hundreds of knots! Gonna go watch Wallace & Gromit and have some herbal tea.