Geeeeeeeez what a weeek i tell ya..the road trip to Ottawa was totally groovy!! We stopped off at The Big Apple which is highly over-rated in my opinion!! Quite disappointing with their half-baked apple pies, very untasty, but their apple dumpling was pretty good! And they had a paddock in the back where we could feed the llamas..that was fun!! 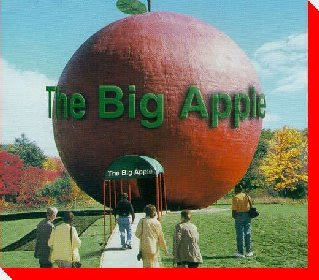 I loved the big signs that had every major city around the world and how far it is from this place in km on it. We made it to Ottawa around 6:00 pm, i grew up most of my childhood there and as we got there, i felt like we were entering an alien place, it felt uninviting and it took 6 years coming back to realize what a boring barren wasteland the capitol of Canada really is! Its just not the sort of place for quirky me! Not much has changed, we did notice several new buildings in downtown with stores inside but basically the downtown area is still dimly lit, just as it was always! Anyways, we got to the Chateau Laurier (the only great spot!), and we went over to my dad's company area where loads of people were gathered chattering about and we ran into Peter aka "the scarecrow" and his wife, the guy is a walking punchline and when my mom said that he looks good (last time we saw him at his place, he was all grimey from working in the garage and he was all clean-cut and dressed up now) and he replied by saying that he is the ugliest guy here and he's gonna scare everyone away and mom obviously didn't hear what he said coz she said "u-huh!" and he just laughed and i said that she didn't hear him and so he repeated that whole thing again and mom looked embarassed..hahaha!! FUNNY! The General Dynamics dinner was held in this exquisite ballroom and we sat at one of the round tables, we didn't know anyone we sat with and my dad's other friend never showed up, we talked with a nice couple, this English high school teacher who thought i was still in high school which made my day :) She was originally from Poland and her engineer hubby who looked like Prince Albert! Everyone at the table was impressed by my culinary expertise when i guessed what was in the soup..hahaha..i have a photographic memory when it comes to menus! The soup was cream of asparagus and artichoke which i didn't really care for, then came yummy salad with pecans and pears in a caramel vinegrette, then orange sorbet, the best was the chicken supreme with mashed beets..during dinner, some guy with a heavy cute cockney accent spoke on a podium and i guessed that he's from Liverpool and the Prince Albert guy said that he's from Northern England, so WAHEY! i guessed right! I, being a totally daft girl, i took a big gulp of grand marnier and the whole fuckin' drink burned through my entire body and i thought i had set myself on fire! Thank gawd dessert arrived and it was heaven! the hazelnut tulip was the best!! I met my dad's boss who looked very jurassic with a hawk nose and his wife was so sweet, this guy was apparently known around the office as a gropey-feelie, why is it that the fugliest guys think they are hunky-hunks??LOL. I wish there could've been a band playing or at least have some sort of soft music in the background coz i hate eating and having to listen to mouths move non-stop, it just reminded me of a train station and to be stuck at a table with Meryll Streep fans..yeeeesh! okay, i like her too but how long can you talk about her? We left around 10:00 pm coz it was a 7 hour drive back, so we just cruised a bit around the marketplace, i was sad to see the British pub Elephant Castle with the red phonebox gone, also where i used to go for modern dancing, its gone, Elgin street was the same, my favourite magazine shop is still there. Our old house is on sale again and we wanted so much to visit with our old neighbour, my mom's friend, and she still lives there coz the bamboo furniture in the sun room in the back were all still there and we heard the tv, so we knocked and pounded on the sliding door and the tv turned off so we knew she heard us but she never came to open the door, we were deeply gutted! my dad said that she must be senile, but i think that she might've thought there was paranormal activity happening and she was too afraid to open up. Its really sad coz she could've looked out the front and recognized our car. We got back at 6:00 am and went straight to snoresville. Its odd that the drive home seemed endlessly long compared to the drive to Ottawa!

Slept in on Friday till 2:00 pm and i just went into work to pick up my paycheque. It was very summery weather and spent the day outside. Watched "Psycho" (the original one of course with Anthony Perkins as Norman Bates). Next day i decided to dress up as a 70s zombie rollerdisco queen and i actually got a treatbag prize for my unique costume when i got to Stew's flat. I didn't stay too long coz i was feeling sick. Not many people were dressed up and most of them were already passed out on his couch or on the floor, i wasn't really in the mood to party. I got driven home, and me and mom stayed up and watched "Most Haunted: Live in Transylvania" which was good and then watched "Halloween".

LISTY LISTY:
THINGS THAT MAKE ME HAPPY:
* playing with Stew's guinea pig
* oven baked apples with cherries and honey
* curling up on the couch in a soft blanket
* Stew's fridge all filled with vegan goodness
* playing candyland with friends and feeling like a little kid again
* looking forward to cleaning the house and painting over the weekend..i hate clutter so we're going to do a clean sweep!