I killed my paycheck, totally!(i'm referring to the Toronto shopping coz i couldn't possibly kill a paycheck over 50cents..LOL). Had a blast at the mall on Friday and i was able to bag 2 pairs of fishnet stockings for 50cents each! i love incredible bargains like these!! I saw old movie dvds dressed up, like "Saturday Night Fever" had John Travolta's white leisure suit with necklace, "Ferris Bueller" had the vest sweater that Matthew Broderick wears etc..sooo cute!!!! When we were at Grocers, we asked someone what Polenta is coz we didn't know. WTF is polenta? now i know that its basically Italian cornmeal and we searched for it everywhere and finally some guy knew and pointed us to the coldcuts counter and on top in a basket were rolls of polenta. It was hard to coat the chicken with that stuff but it did taste good. Then it was all what am i gonna wear to Toronto..something i love doing before i fall asleep is picking outfits in my mind so that when i wake up i don't spend hours wasting time and flinging stuff everywhere. Its not like i really care in a fashionista sort of way, i just like relaxing at night with clothes dancing in my head..LOL.

Road trip to Toronto for the Annual Ballet Meeting at the Living Arts Center..so here's the funk:
9:00 am - got up, showered etc..and dressed in goth dolly black lace skirt, Blondie t-shirt, above the knee-highs with hearts on them, Chinese flats with skulls (i've been in a dark goth mood lately.
9:35 am - chocolate chip cookies for breakfast (i can eat just about anything in the morning except eggy things).
10:15 am - we left and i sang along to Ladytron and Horrorpops, i have a cool dad who lets me blast music real loud in car :)
11:50 am - arrived at Living Arts Center and it was getting real warm outside. OKAY, only in Toronto can you possibly see total weirdos!!! this guy wearing Adidas sports stuff had 2 huge plastic bags filled with red peppers, we're talking about 100 or so in each bag and he was walking back and forth in one spot and lifting them like weights! So, dude, where can i get me some of those heavy red peppers??
1:30 pm - had a croissant with jam snack from Starbucks and then we headed to Queen Street..there was a jazz band playing in the middle of the road and we had to drive around them, and further down, a quartet of brass instruments played cute dixieland music. First place me and mom went to was Urban Outfitters, where mom tried on a whole bunch of stuff..it royally SUCKED that i wasn't allowed inside the changeroom! They had a huge seating area inside of it..WTF for if only one person can go in? I fuckin' hate crappy rules!!!! I was feeling sick too so i sat down on a bench and mom had to come out and show me the outfits while lots of people were lined up and watching..such a fuckin' drag!! The Zellers changerooms are the BEST coz they are super large with seating and they couldn't give a rat's ass how many stuff you try on or whose inside! Anyways, i loved their fart books..LOL! I had fun pressing the buttons and hearing all sorts of farts, mom got embarassed coz it sounded like we were letting loose. They also sold vinyls of the latest albums for the same price as cds, and glasses that said "FUCKER" on them, Stew would've loved those! Some guy walked around with a sweet bulemic looking dog who got excited when he saw me and jumped on my skirt. I love big metal letters!!

Got one in the letter "J" in turquoise. And they were selling these gigantic wooden clothespins, no other purpose but as conversation pieces, unless you are the Jolly Green Giant and wear jolly giant clothes!Had so much fun in Black Market thrift shop!! This cute guy at changeroom heard me asking where the changerooms are and he yelled "over here!" and then he happily told me that he found a great pair of jeans for a much lower price then anywhere else and he kept looking at me and smiling and i said "yeah totally great deal!" He was very sweet and he was either with his sister or girl who was his friend? or just liked to talk a lot. I couldn't resist a cute Alice In Wonderland t-shirt, the one when she grows tall. They also sold long 80s t-shirts with "who the fuck is Mick Jagger?" printed on them..LOL. And i also saw the cutest child red platform shoe, probably David Bowie's when he was 5! Glam rock started from his embryo. I wonder if he would've bought one of those? There were these Japanese fashion girls that went by on the street and mom thought that its amazing how cool people dress here. Yeah, the city is where its at,baby! On our way to Yonge Street, my dad nearly flattened out a biker who came out of nowhere, crikey!! HMVS now charges 5cents for bags! Y'all know where all that goes towards, the stupid government! I couldn't believe my luck when i found this book on sale for only 5bucks! 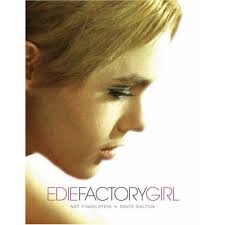 Edie Sedgwick Factory Girl! And cds. Then we headed to the Belgian café which has become a total rip-off! Anyways, we got there a few mintues before 6:00 pm, and there kitchen was closed. There was an angry woman who asked them why they gave her a menu if the kitchen is closed? She did make a valid point! and the guy's silly response was that they let people view what they have to offer, but really, come on! that's like putting an empty dish in front of a hungry person! We were able to get 3 puff pastry vegetable squares, but they were like $4.75 each! and they wouldn't even heat them up for us. Mom hated their latté, so we had to stop at Starbucks and there was a annoying bum inside! He scared the crap outta me by sneaking up behind and demanding change! Gawd!!
9:00 pm - we got home and had cold drumsticks and milk and i was in dreamland by 10:00 pm since i had to work the next day.