Had a very strange dream..i saw Steve Buscemi riding on a bike down a street and i ran after him and he stopped and was happy that i recognized him and then we rode up an elevator in a hotel and a small white furry dog kept on attacking me inside the elevator, he just didn't like me and we got off and some nasty agents grabbed Steve and tied him up and i got away and went down to the first floor where these two Chinese men were writing a secret code on a large white canvas on the floor and they were painting Chinese symbols in black letters and i asked them what it means and they said that its a warning that there are spies in the hotel and then i wanted to take the elevator up and when the door opened, Yoda was inside looking very depressed and i asked him whats wrong and he said he's out of a job since the new Star Trek film, the elevator closed and thats when i woke up. Remind me not to see the new Star Trek film..haha.

Friday we drove down to Burlington and had fun in Ikea looking around at groovy stuff..i couldn't resist this.. 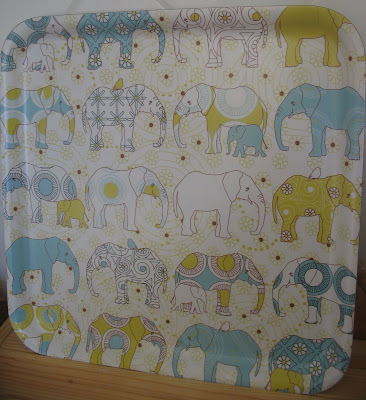 ..im crazy for anything elephants! and besides i needed a kitchen tray. Had Fortinos Bistro oven-baked cheese pizza which is the BEST pizza ever!!!!! i love thin crusts and loads of cheese..it was sooo yummy that i actually proposed to my pizza slice..haha. Only in Fortinos can you get organic Costa Rican pineapple, chocolate creamy lady fingers, Bistro banana cream coffee & pizza, and cinammon & sugar Montreal bagels..HEAVEN!! Been staying up late nights sewing costumes and watching Brady Bunch and eating way too much watermelon.

Saturday, me and Maria went to see the film "Earth" and it was AMAAAAZING!!!!Its soo sad that the polar bear is on the endangered list among several other beautiful creatures..go see the film and plant a tree.

It was freeeezing cold on Mother's Day..the day started off with me and dad making mom homemade Belgian waffles with pineapple, blueberry & maple syrup topping..mom was soo impressed. Then we headed to the Glenridge Quarry Naturalization Site which is sooo groovy!! We walked down a trail which led to the science area..large circles of fun like a giant sun dial, pond boardwalk, huge colourful iron-bar rainbow, info on the weather.."Will the sun ever burn out?..no, sun's been cooking for over 4.5 billion years..", there was a mega long tunnel from one end of the hill to the other side..it was too dirty to crawl through. We went inside a big farm silo and had fun yelling and heard our echoes, the ceiling was very high up like a cathedral and there was a giant weather windmill beside it like in the film "Twister". We didn't feel like walking to the Heritage Arbouretum coz it was just way too cold! On way home, we stopped off at Kurtz and got this long asiago & garlic bread thats been baked inside a funnel and its very tasty, and also some dried candied cantaloupe and pango mango. I made a delicious meal..maple glazed chicken with caramelized pears served on a bed of pineapple wild rice and salad..mom gave me a standing ovation :) For dessert, a heart shaped double fudge Mother's Day cake.