WOWWWW..its been quite a week so far including my wonderful birthday on Tuesday!
First off, on Friday it was very spring-like weather and we went to Starbucks and had yummy spinach feta cheese wraps and then i went to HMV and i asked the very sweet girl with the arm tattoos if the Enigma cd i ordered 3 months ago had come in yet and she told me that it was odd that it should've been in by 2 weeks! So she checked the computer and she told me that the company is not reliable and they've had problems in the past, so i asked her if the store still had the other cd in and she got it for me..i was sooo happy that she found it that i gave her a hug and she was all smiles..she deserved the hug, she helped me so much! She ordered for me the Super Furry Animals new album which is coming out soon and she told me that she's going to tell her boyfriend coz apparently he's a big fan of that band too..erm..i wanted to ask her if he's got a twin brother with the same interests..*SIGH* Mom & dad got me a beautiful bouquet of daisies with a mini happy face mylar balloon and a giant happy face pencil and psychedelic balloons.

On Saturday morning, someone let us know that there is 50% off 10 meters at Fabricland, there was a coupon in the newspaper and she wanted to know if she should call several mothers and they could each cut out the coupons and use them..i was like "whaaaaa? are they gonna rent a bus?" which cracked mom up..its like the Partridge Family bus.."come on get happy.." Anyways, we went instead and got the materials needed for several of the Recital costumes.

Sunday, my friends took me out to see a matinee movie..we saw "Slumdog Millionaire"..it was sad in some parts but it was a good film..i enjoyed the music a lot and the cute Bollywood dance sequence at the end of it was fun! haha..we did the arm movements in our seats..its a good thing we were sitting way in the back! And then we went to a diner for some cake. Stewart was sooo sweet when he said to me "even though you are in your 20s, you still look 17!"..thanks Stew!:):) I got groovy pressies from my friends: photo album, chocolates,shag art stationary, a book gift certificate, mushroom candle,peace sign necklace and bracelet (from Stew). Later in the night, i watched the Aussie Grand-Prix and was happy that Jensen Button won it!!

Monday after work, we had leftovers from Sunday when i made the Titanic meal (chicken lyonnaise with rosemary roast potatoes and carrots in cinamon cream sauce..mmmmmm!), i watched "Napoleon Dynamite" and later helped blow up more balloons (my purple Princess balloon, my dino balloon etc..) Had green jello with whipped cream while watching "Foul Play" with mom late at night.

Tuesday, i had a day off from work..yipeeee! My dad was able to find an all day parking for only 3 bucks! Had a blast playing Glow-in-the-Dark Galaxy Mini Golf..each golf area was filled with awesome gigantic fun stuff like robots, astronauts,King Tut, and my fav. area was the 60s/70s with groovy VW Beetlebug, lava lamps, enormous happy face and Rolling STones tongue! It was fun when our clothes glowed too and my hair was glowing white..freaky!! They played one of my fav. songs "The Show" by Lenka and i sang along while i played..FUN! We were also alone for most of the golfing until we got near to the end of the game..it was great that we were able to take our time! I won the game :) Then we walked down towards the Rainforest Café and the hostess thought i was a child..haha..so mom thought it would be great (as a joke) to say that i was actually celebrating my 18th birthday, and she believed it..haha..COOL! We were seated at a table next to the pretty waterfall with the rainbow. Mom told the waitress that i'm celebrating my 18th birthday..hahaha..and she said that she will bring out the Volcano cake at the end of our meal. Me and mom went to wash our hands and they were playing Bob Marley songs in the washroom so i danced a bit in there..haha..dad ordered for us and i got an extra plate so that we could share the food..had yummy Caribbean hot & spicy shrimp, chicken, ribs and pot roast with garlic mashed potatoes which was also very good!! The pina colada was sooo good, very strong!! so i was a bit tipsy by the time my cake arrived and wow, did it ever!!! I heard a big shout "VOLCAAAANOOOO!" as the waitress brought the mega huge fudgy brownie cakes stacked up on mountains of vanilla ice-cream and whipped cream..mmmmmm!! I was way too full to eat much. It came with a sparkler on top and then she announced to everyone that this is a very special birthday..Julia is celebrating her 18th birthday..and everyone in the room clapped and congratulated me which was soo nice and pretty hilarious at the same time..haha! Afterwards, we said hello to the lone shark in the giant tank and my dad bought me a purple rattlesnake plushie from the shop..total surprise :) he knows how much i love collecting snakes. Then i played several games (the hammer pounding game and the bowling game which i was very good at it..i kept on rolling the balls up to the far corner marked 200 points), i collected 61 tickets in total and i got 2 prizes..a flower bracelet and a butterfly ring. I wanted to have fun in the bumper cars but i was so full that i was afraid i'd get sick. When we got home, i opened up my pressies..i got a beautiful gold bracelet with heart, knee-highs, cds (Best of Joy Division, Morrison Hotel - Doors and of course Seven Lives Many Faces - Enigma), an owl potpourri, Pippi Longstocking t-shirt, James Dean t-shirt, cowboy blouse, leopard print tights, and this Japanese Kingdom Hearts doll.. 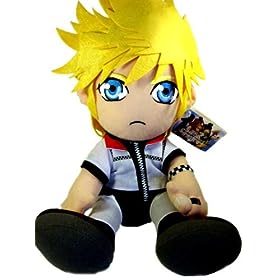 and i got several lootbags filled with chocolates, jade ring, stickers. And then i had my Carebears birthday cake..it came with 3 poseable carebears :) I got drunk on Babyduck champagne..haha..had a BLAST!! Oh and my mom presented me with a 1st Place Trophy for my Strawberry Shortcake costume that had the highest score of 9.5 out of 10 at the competition..wow, that was a great surprise!!:) Tonight, we're watching "April Fool's Day".