hahahaha..im still cracking up from Saturday when i went to the mall with Stewart..i had to ask this cute blond indie haired guy(like the guys in Interpol) where The Killers new album was and they had put them up way way out of reach, up on top shelf and the guy had to go on his tip-toes to remove it for me..i guess they thought it would be safe up there coz maybe some wee yobs might think this is a band made up of a bunch of prisoners?? i dunno. I had my mom put it away for me for X-Mas..grrrrr..i can't listen to it until the 25th! Anyways, i was in the line-up to pay for the cd and Stewart kept on making me laugh coz there was a girl at the cash who had a severe tanning job and he said that she looks like a gingerbread cookie..hahahaha! he then posed like a gingerbreadman and i told him to cut it out coz people were staring at us all weird, and i thought he was being mean though but still it was hilarioso funny! And then when we went to the food court to get some Greek take-out, he put his semi-long hair underneath his chin to make it look like he suddenly grew a beard coz he saw this dude with a goatee down to his pee-pee standing at the pizza place..hahaha! his girl-friend had thigh high white plastic high heel boots on that matched the colour of her hair and she kept on bitching at the pizza people to hurry up her order. The guy in the goatee had massive tattoos on both his arms..he looked real bad-ass in a Rob Zombie kind of way. I told Stewart that he'd better stop making fun of the guy coz he'll beat him up! Stewart can be sooooo embarrassing!!!!!haha. We also did a bit of thrifting on the way home..i got this wicked pair of purple pants and i was soo pissed off that i finally found a groovy vintage bicycle and when i asked the price the guy said that it was just brought in and he tried the brakes and told me that its unsafe, but then a few minutes later when i went back to the front of the shop, the bike was gone!! it looked exactly like this.. 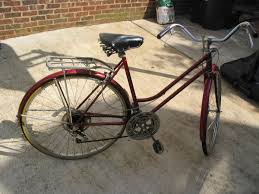 And i'm in loooooove with these shoes..

Converse sneakers are soo expensive here!! They cost over $100.00!

My dad bought this gigantic jar filled with pickled yellow peppers stuffed with cabbage and they look like some creature brains in formeldahyde..haha! It tastes pretty good though, but seriously it reminds me of all the gross foreldahyde jars that Mr. Drisdale, my Science teacher, kept on the window ledges..he had them all lined up like a creepshow army and unfortunately, my lab partner refused to change seats with me, so i always had a great view of the cow eyeballs and monkey brains..ewwwwwww!!!
Anyways, my mom made amazing Hungarian soul food (fried chicken with paprika potatoes)..mmmm-good! And i watched "Talented Mr. Ripley" and cuddled with my cat and drank Linden tea and just felt really good.