Me and Maria played mall rats on Saturday..you know..hung out at the food court and pigged out on yummy parmesan cheese pretzel bites and been totally lazy and had fun guy-watching..we saw these 2 shaggy haired guys and they were fooling around at the mall vendor cart that was selling punk rocker belts and one of the guy's wallet chains got caught on a studded belt and when he wanted to leave, he took down the entire belt rack and it made a big noise and the little bald Italian guy was swearing at them and his bald head was a red sparkly colour and it made me think of the time when me and Stacey would throw our big wad of gum down at bald headed men walking on the main level of the mall..hahaha..yeah i know, we is baaaad!! but it was hilarious coz this one time, she nailed the guy right in the center of his head and he had a funny look on his face and kept on looking up trying to figure out what hit him..hahahaha..we'd of course hide behind the wall..oh and the most fun i really miss is when we'd sit down on the escalators and ride down like that and people would stare at us like we were high on something..yeah high on life!:) oh and when i used to live in an apartment, me and my friends would throw gum down at the janitor coz he was always yelling at us for doing nothing, so then we gave him something to REALLY yell about..haha! And this is soooooooo scarey and dangerous to play with.. 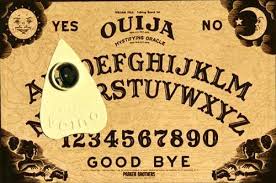 This one time we tried to conjure up Kurt Cobain and we got someone else..the candles went out and then when my friend left, she was on 8th floor and i was on the 4th floor and both our parents were out, so then there was like a bunch of knockings on the door and i looked through the peephole and she was soo scared and when i let her back in, she told me to put the lock on the door coz when she was walking up the stairs to her floor, this scarey looking guy with an afro started chasing after her, so then we went downstairs and got the superintendant who searched all the staircases on both sides, but the scarey guy had disappeared..since then, i never ever touched another ouija board!
This is the apartment (Ambleside Drive) i used to live in..

It was fun!! it had an indoor pool, a sauna, recreation room with pool table, children's playroom, exercise room with those huge golf nets against the wall, a convenience store etc..i really miss the place!!