Ever hot and stuffy and sticky today! i was even too tired to bother with the pool so i just lay in the hammock sipping blueberry ice-tea and doing flower power puzzles and eating jammie dodgers.
on sunday, maria's cousin dropped us off at the zoo since he was visiting friends anyways and we had a great time! i looove those giant monkeys with the painted bums 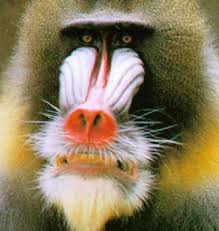 (they are called mandrills and they are actually related to the baboons and "mandrill" means man-ape..so thats why it reminded me of my boss so much!! haha!) and at first i was scared to touch the stingrays coz i kept on thinking of the crocodile hunter but these were small and when i touched one, it felt all rubbery but smooth..they are cute little buggers!! the sloth was hiding in his hole again..the last time i was at the zoo, it was the same thing! and the parrots were out sliding themselves back and forth near the capybaras (those fascinating creatures that look like giant rats). It wasn't overly melting hot, it was comfortable to walk around. We had blue slushies (i call them blue meanies..if anyone has seen the beatles yellow submarine will know what im talking about)and shared fries and we got some animal postcards and stickers and we got picked up at closing time. it was a very relaxing and fun day :) and then i came home and felt really exhausted and sat down on the couch and watched groovy geek films (star wars,empire strikes back..)

backtracking to saturday..went to library and got out a bunch of videos and cds like the new gnarls barkley which is a huge disappointment, beach house, and the new moby which is awesome!!!!!!and then we went to find preston pies which is a place that was suggested to me by steve's friend who is from liverpool (he's cute with ginger hair and wears a mod tartan print cap on his head and has ska sideburns and talks real cute!) and the bakery is owned by hungarians who used to live in manchester and they sell lots of english stuff, english and hungarian baked goods like savoys which are creamy sugary pastries, currant squares, linzer cookies, butterfly creams, sponge cakes etc..also got a pack of jammie dodgers and turkish delight. there was an old manchester united poster on the wall..then we got fish n chippies next door which was sooo good!!
what i'm lovin' lately:
+ dutch chocolate ice-cream
+ going barefoot
+ watching victorian films till real late
+ being told that i look like marilyn monroe :)
+ playing wishing somehow you were here again from phantom of the opera on the piano..its such a pretty song!