At work today we were talking about songs that have "cat" in the title..some of the ones i could come up with were the awful "Cats" broadway soundtrack..hahaha..there's a reason why i hate it soo much! the ones i like are Love Cats - The Cure, Stray Cat Strut - Stray Cats, someone mentioned the Meow Mix tv commercial, Cat Scratch Fever - Nugent, hahaha..and Steve said something about Who Let the Cats Out but we all told him, its Who Let the Dogs Out. Oh and there was that song from "The Aristocats"..I Just Wanna Be A CAt or something like that and Peggy Lee's Siamese Cat song. Funny way of spending a work break, doncha think?

Lily made me hungry by emailing me about Semla..it looks like this.. 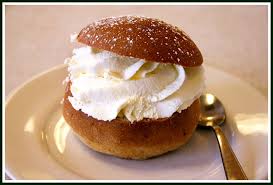 It's a pastry(obviously..heeehee) eaten in Scandinavia on Feb. 5th and the original filling is almond paste and its usually eaten in a bowl of warm milk..mmmmmm!!