I just had to share this written by Krystyn becuz whatever she said out loud, is what i've been thinking for weeks now!!!! "why they keeppushin' The Wedge show back later and later?! drivin' me up the bloody wall and back down again. It has that ominous feeling of being "cancelled" *knocks on wood*like, really... who stays up to watch tv at 3 in the morning...? i mean, besides the crazy insomniacs like meself, heh...
they need to get that OC shit off my tv and bring back TW... THE WEDGE!damn you, CTV Globe Media for taking over Chum... DAMN YOUUUUU!" *CLAPS IN THE BACKGROUND* for those of you who are not polar bear igloo inhabitants,click here to see The Wedge page

And how come Florida is the only place that has Sloan's Ice-Cream Parlour??? ohmigod, that place is sooo crazily pink that i could swoon with love forever inside it!!!!!!!Tutti Fruitti in Canada can't even come close!!!!!

An indie film i highly recommend.. "All Over Me"..90s grunge youth..riott girl bands..sex..drugs..its got everything!! Its like the grunge version of "Ghost World".
Bobby's been clawing up the living room carpet when he gets upset lately..it figures that i end up with a teen-angst kitty!
I finished my hardboard Calder-esque mobile and it looks something like this but i used black/blue colours instead.. 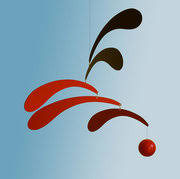