Been to the mall..holy shite, it was serious packed with people!! I also at some point managed to get myself sooo paranoid coz of all the mall shootings lately..i don't know, its just that when i hear something scary, i start to imagine all sorts of morbid bad things happening, so i found myself wandering around 50% more alert than usual. Thankfully there weren't any screaming kids this time! or usually i end up in a hit-and-run with strollers! I got some cute stocking stuffers at the Buck or Two, and then i totally became skint when i purchased the coolest punk rock headband at Le Chateau which by the way, tripled their prices since the early 90s. I also got hit on by a bunch of psuedo-punk/indie boys with Didi Ramone hairdos. Yumm! And then i ran into Stewart & his Strokes-sex-god boy-toy and we had fun talking at the food court whilst i had my mouth full of holiday pretzel. And i was miffed that the rock-n-roll vendor doesn't sell buttons anymore..i'm such a button junkie..grrrrr! i'll have to wait until the road trip to get my Sex Pistols fix..im on a punk rock oldskool kick lately.
On Wednesday night, i watched "A Christmas Story"..my favourite gotta-see holiday film..and today at the mall, the candy vendor is still selling that leg lamp but its like a whopping $255.00!!!yikes! They are also selling bobbleheads from the film. 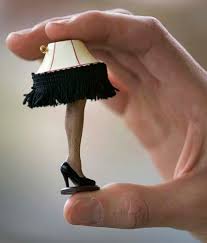 oh look it comes in mini size too..i could probably afford that one.

On Thursday night, i watched "Shallow Grave" and the toy train all of a sudden came alive and started whistling and clanging and now im totally convinced that there is a ghost in the house!

Lovin': candycane peppermint hot chocolate, sno-ball whoppers,cream of asparagus soup,the fact that the beautiful neglected barncat tabby loves to sleep in the little cathouse on our patio..unfortunately we can't let him in for too long coz Bobby can't stand him..they are both tomcats and its really sad that there are just way too many homeless barncats around our area and i'd like to think of our place as the Salvation Army for cats..we always feed them and José has gotten soo attached to us that its heartbreaking that he has to stay outside. Oh and yesterday when he came in for a little bit, i noticed white wormie thingies coming out of his bumhole..he must've ate a bad mouse or something.